A biotech company founded by UCLA Samueli School of Engineering bioengineers has launched a product to look for COVID-19 more accurately than conventional tests by extracting RNA from patient samples.

PHASE Scientific was founded in 2015 by professors Daniel Kamei and Benjamin Wu along with alumni Ricky Chiu, who is the company’s chairman and CEO, and Garrett Mosley, who leads its research and development operations.

The new technology, developed by the company’s in-house team which includes UCLA bioengineering alumni, uses chemical reagents to concentrate target RNA molecules by 10- to 100-times their original amount, according to the company. An increase in RNA can improve a test’s sensitivity, which will cut down the number of false negative results, and hence allow for timely detection of the virus closer to when someone was first infected.

“The ability to reduce false negatives is huge,” said Wu, who is leading a collaborative UCLA team to produce personal protective equipment with members from engineering, dentistry and medicine. “Every 1% improvement in accuracy is significant, especially in this devastating pandemic. I’m really proud of our bioengineering alumni for stepping up and becoming key contributors to help our society tackle this global challenge.” 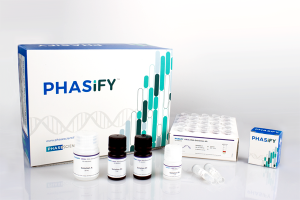 The RNA extraction kit is being used in hospitals in Hong Kong and China, including two in Wuhan. Currently, they are in the trial stage with technicians getting familiar with the kits and validating them. Each site is testing around 50 to 200 reactions. The U.S. Food and Drug Administration has requested public and hospital laboratories conduct their own validation studies of the test kit. The company and its new technology were recently highlighted in the South China Morning Post.

PHASE Scientific specializes in technologies that make it easier to detect trace amounts of target molecules in a sample. The idea originated from doctoral theses on diagnostic technologies that Chiu and Mosley authored while they were both members of Kamei’s research lab. The research led to products being developed for infectious disease screening, food safety and liquid biopsies for cancer detection. In addition to Chiu and Mosley, the company includes two other former Kamei lab members and three other UCLA bioengineering Ph.D. alumni among its employees.

“This is a great example of how UCLA engineers are contributing to the fight against COVID-19, and I’m thrilled how all of them are achieving the goal we have always put forward — to have a positive impact on our society through improving human health with novel technologies,” said Kamei, who along with Wu, is a scientific advisor to the company.

PHASE Scientific is headquartered in Hong Kong, with R&D and manufacturing facilities in Garden Grove, Calif., and an office in China. The company has also licensed point-of-care platform technologies from UCLA.