A research team from the UCLA Samueli School of Engineering has demonstrated that a specially designed surface is able to reduce friction from flowing water by nearly a third. This was done in a first-ever successful boat test on open water in Marina Del Rey, California. 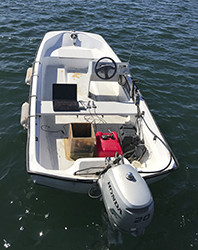 In a study published in Physical Review Applied, the researchers say the sample surface could ultimately be scaled up to cover the hulls of boats and ships to help them cut through water with less resistance.

“The effect is similar to an air hockey puck slipping over the table with ease,” said study leader Chang-Jin “CJ” Kim, a distinguished professor of mechanical and aerospace engineering at UCLA Samueli. “The decrease in drag would lead to reduced maritime fuel use and emissions.”

The idea of using an unusually water repellent, or “superhydrophobic” surface on boat hulls has been around for about two decades, with the concept showing initial promise in lab experiments. Instead of flowing directly over a solid surface, water would flow over a tiny film of air trapped between water and the superhydrophobic surface.

“Superhydrophobic surfaces were shown to maintain a thin film of air, called a plastron, during water channel experiments in many labs,” said Kim. “However, this plastron would inexplicably disappear when the same surfaces were tested in open water outside the lab. The main breakthrough reported in our study is that we’ve succeeded in keeping the plastron throughout the field tests and confirmed the reduction in drag on a boat in open sea water.”

Global studies have estimated that ocean cargo ships account for about 12% of the world’s transportation energy use, and about 15% of global nitrous- and sulfur-oxide gas emissions.

“The friction drag of watercraft constitutes significant portions of global energy consumption and gas emission, so even a mild reduction of the drag would yield a significant impact for the world,” said Kim, on the long-term motivations behind the study. 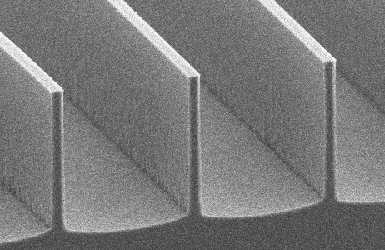 A scanning electron microscope imag of a surface, designed by UCLA mechanical engineeers to reduce friction of water on boats. The grooves are one-tenth of millimeter in depth.

Designed to maximize the trapping of air, their superhydrophobic surface resulted in a 30% reduction in friction during the experiments. The tests were conducted on open sea water at speeds between 6 and 12 miles per hour. Until this UCLA study, a superhydrophobic surface had never been confirmed to reduce drag in a realistic open-water environment.

“The main challenge for us was to develop an experiment that would represent the real conditions facing a boat while using a small sample we can produce in the school’s research lab,” said Kim, who is also the UCLA Volgenau Endowed Chair of Engineering. “Since nothing like that existed, we had to develop everything ourselves.”

In addition to retrofitting a small section of the boat’s hull and developing an underwater camera system to record the experiments, the team also had to create a compact flow sensor, a three-year-long development process that resulted in its own published paper.

For Kim, the successful demonstration culminated many years of research. His group is already working on manufacturing the superhydrophobic surface to cover an entire underside of a boat for further experiments. In addition to boats and ships, Kim said the surface could also be used to reduce the friction of liquids flowing through pipes.

The study was supported by the Defense Advanced Research Projects Agency (DARPA), the National Science Foundation (NSF) and the Office of Naval Research (ONR).