Materials scientists from the UCLA Samueli School of Engineering and colleagues have established a novel way to make the building blocks for flexible organic electronics, using special nanostructured materials that were previously proven to be difficult to assemble and bind together.

A study detailing the research has been published in Proceedings of the National Academy of Sciences.

The advance could lead to next-generation flexible electronics; in particular, flexible and wearable sensors with superior performance. In addition, the nanostructured materials have several advantages — they are unaffected by changes in temperature as long as conditions remain under 200 degrees Celsius, or 392 degrees Fahrenheit, and have “self-healing” properties that allow the structure to reassemble after being treated with solvents used in industrial manufacturing.

The basic building blocks for the materials are three-dimensional “X”-shaped molecules composed of several rings of carbon and oxygen. The molecules’ symmetrical shape, called a tetragonal disphenoid, helps each bind with others to form sheets. 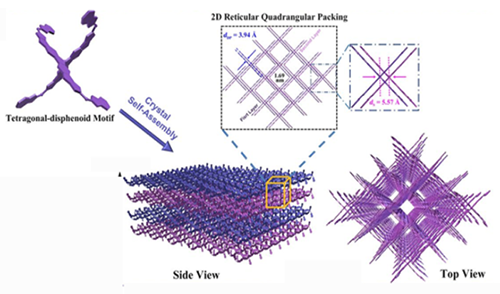 “Just like Legos, one can build a large molecule model from these basic building blocks,” said Yang Yang, the project’s principal investigator and UCLA’s Carol and Lawrence E. Tannas Jr. Professor in Engineering. “In this research, these new building blocks can be used to form different functional elements for future organic electronics.”

For example, a stack of these sheets of molecules could be used to develop a new class of flexible electronics — wearable sensors that are more sensitive to trace amounts of chemicals. Researchers noted the key breakthrough in this research was making these molecules bind together without losing their abilities to conduct electricity.

The team built a transistor to demonstrate the process of making the nanostructured materials by using a type of chemical bond that joins electrons with neighboring atoms, as the electrons overlap in their orbits.

“It’s as if the compounds are held together with bungee cords, rather than solid screws and rivets,” said Dong Meng, the study’s co-lead author and a UCLA postdoctoral scholar in materials science and engineering. “This type of chemical bond is what makes the materials flexible. The key was using the right type of ‘bungee’ cord— in this case, a noncovalent π-π bond, as it also conducts electricity well.”

Yang, who recently returned to UCLA full-time after a 16-month sabbatical, holds faculty appointments in materials science and engineering, and bioengineering at UCLA Samueli. He is also a member of the California NanoSystems Institute at UCLA. The other senior author of the paper from UCLA is Kendall Houk, the Saul Winstein Professor of Organic Chemistry. Jonathan Lee Yang, who performed the research as an undergraduate chemistry student at UC Berkeley, is the other co-lead author.

Other study authors are from universities in China, including Beijing University of Chemical Technology, Tsinghua University, China University of Petroleum and Soochow University and Capital Normal University — in addition to another author from Marmara University in Turkey.

The research was supported by UCLA and by the Air Force Office of Scientific Research.