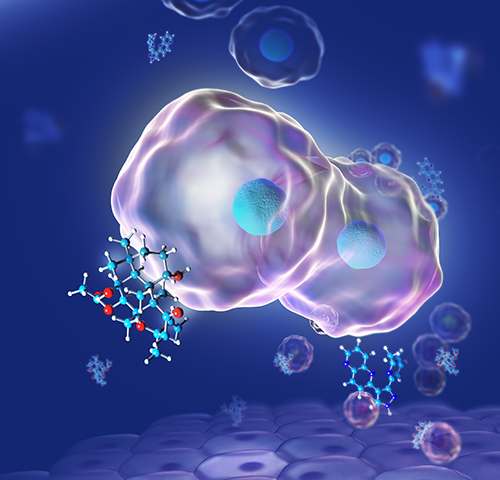 Skeletal muscle – the type of muscle that attaches to bones and enables movement – is the most abundant tissue in the human body. This tissue has the ability to regenerate after minor injuries, a process facilitated by resident muscle stem cells that help to build new muscle fibers. However, acute muscle loss (which can happen in severe accidents), progressive muscle loss, or genetic diseases, such as muscular dystrophy, may compromise this tissue repair process. In these cases, patients can experience mobility issues and have a reduced quality of life, underscoring the need for novel methods to help regenerate skeletal muscle.

Because muscle stem cells can repair damaged tissue, the investigation of stem-cell-based therapies for muscle regeneration is an area of active research. While this approach is promising, sources of muscle stem cells are extremely limited, and growing these cells in the lab is currently an expensive and time-consuming process.

Recently, NIBIB-funded researchers at the University of California, Los Angeles (UCLA) identified a drug cocktail that can effectively activate and expand a population of muscle stem cells, which are either resident in the muscle, or are isolated from other tissues, such as the skin. The researchers found that the muscle stem cells could heal damaged tissue in three different mouse models: adult mice, aged mice (which have a reduced ability to heal), and a mouse model of muscular dystrophy (which displays severe muscle wasting).

“A major bottleneck in the muscle regeneration field is the lack of an effective method to generate and proliferate muscle stem cells,” said senior author Song Li, Ph.D., a professor in the departments of bioengineering and medicine at UCLA. “Using our drug cocktail, we can efficiently expand this cell population, harnessing their potential as a therapeutic agent for muscle repair.”

The drug cocktail includes forskolin, a chemical found in plants that increases the production of cyclic AMP, an important signaling molecule in cells. Also included in the cocktail is a small molecule called RepSox, which mediates stem cell differentiation. While both of these compounds have been used in stem cell research, their combined effect on muscle stem cell proliferation and differentiation was a novel finding in this study, said Li.

Using skin cells isolated from mice, which contain various cell types, the researchers used their cocktail to selectively expand a population of chemically induced muscle stem cells. These muscle stem cells were then implanted into the muscles of pre-injured mice. Four weeks after implantation, the researchers evaluated how well the injured muscles had healed. In all of their models, the implanted stem cells facilitated muscle repair and tissue regeneration.

Li and colleagues then took their research a step further. Instead of growing muscle stem cells in a dish, they wanted to see if they could activate and expand the mice’s resident muscle stem cell population by delivering the cocktail directly into the muscles. The researchers loaded their drug cocktail into nanoparticles, allowing for the controlled release of the cocktail over a two-week period. These drug-loaded nanoparticles were then injected into the muscles of pre-injured adult or aged animals. Compared with mice injected with empty nanoparticles, mice injected with the drug-loaded nanoparticles had markedly improved muscle regeneration and function.

The researchers’ approach of proliferating the stem cells that already exist in muscles has several advantages. Instead of culturing stem cells in a dish and then implanting them into a patient, Li and colleagues envision an off-the-shelf treatment for muscle repair through direct injection of their drug cocktail into damaged tissue. However, this approach relies on the presence of resident muscle stem cells and could not be used for extensive muscle loss, Li noted.

“This work represents a promising step forward in the field of tissue regeneration, and could potentially lead to a more efficient method of repairing damaged muscle,” said David Rampulla, Ph.D., director of the division of Discovery Science & Technology at NIBIB. “For patients with muscle injury or chronic muscle wasting, such an approach could dramatically increase their quality of life,” he said.

Li noted that their cocktail needs further optimization before it can be used with human cells, and that further preclinical studies in larger animal models are needed before this approach can be translated into human clinical therapies.

This study was reported in Nature Biomedical Engineering.[1]

This Science Highlight describes a basic research finding. Basic research increases our understanding of human behavior and biology, which is foundational to advancing new and better ways to prevent, diagnose, and treat disease. Science is an unpredictable and incremental process — each research advance builds on past discoveries, often in unexpected ways. Most clinical advances would not be possible without the knowledge of fundamental basic research.