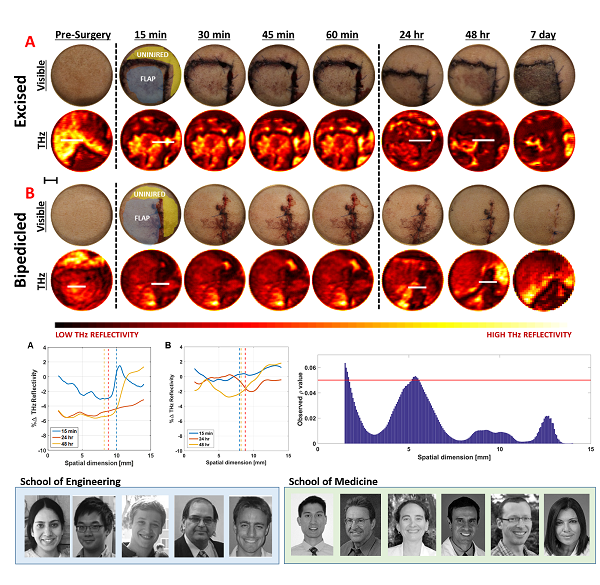 An interdisciplinary collaboration between the UCLA school of engineering and the UCLA school of medicine has produced the first published work describing the assessment of tissue flap viability using terahertz (THz) imaging. The research was led by Professor Taylor and postdoctoral scholar Neha Bajwa in the department of Bioengineering and Professor Maie St. John in the department of Head and Neck Surgery.

Tissue flaps have become a life-saving reconstructive option for patients with breast cancer, head and neck cancer, soft tissue defects, and wounds. A flap includes the harvested skin, muscle, soft tissue or bone, and their corresponding neurovascular supply. This tissue is either surgically resected and rotated or transferred from a donor site to a recipient site. In any flap surgery, the key for flap survival is to maintain or successfully reestablish the blood supply to the flap. Despite the high success rates of flap surgery, a small risk of vascular compromise can lead to devastating consequences and, therefore, necessitates urgent re-exploration for attempted salvage. Early and accurate assessment of flap viability – the most significant predictor of flap salvage outcome – is still an unmet clinical need.

The current gold standard for determining flap viability is clinical examination, in which skin color, capillary refill, turgor, and bleeding patterns are periodically examined. This method, however, is highly operator-dependent, and changes in the appearance of the flap due to microvascular complications are generally delayed by 1 to 2 hours, thus preventing early intervention. Efforts towards achieving more non-invasive and accurate tissue viability measurements have been widespread and include the use of several adjunctive optical technologies such as Laser Doppler Imaging (LDI) and fluorescence angiography. Adoption of these systems in surgical flap assessment have been hampered by a range of clinical constraints.  In the case of LDI, the buildup of significant tissue edema (tissue water content (TWC)) immediately following tissue transplantation prevents the early stage acquisition of data needed to predict flap viability.

This work was funded by grants from the NIH.