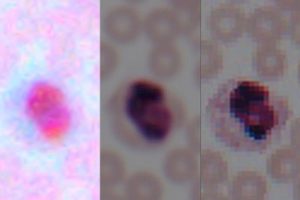 Image of a blood smear from a cell phone camera (left), following enhancement by the algorithm (center), and taken by a lab microscope (right).
Source: UCLA

Smartphone microscopes transformed into lab-grade devices with deep learning
UCLA Samueli School of Engineering researchers have demonstrated that deep learning techniques can discern and enhance microscopic details in photos taken by smartphones in order to improve the resolution and color details of smartphone images so much that they approach the quality of images from laboratory-grade microscopes.

The advance could help bring high-quality medical diagnostics into resource-poor regions, where people otherwise do not have access to high-end diagnostic technologies. They stress that the technique uses attachments that can be inexpensively produced with a 3D printer, at less than $100 a piece, versus the thousands of dollars it would cost to buy laboratory-grade equipment that produces images of similar quality.

As cameras on today’s smartphones are designed to photograph people and scenery, not to produce high-resolution microscopic images, the team developed an attachment that can be placed over the smartphone lens to increase the resolution and the visibility of tiny details of the images they take, down to a scale of approximately one millionth of a meter.

However this only solved part of the challenge, since no attachment would be enough to compensate for the difference in quality between smartphone cameras’ image sensors and lenses and those of high-end lab equipment. But this new technique compensates for the difference by using artificial intelligence to reproduce the level of resolution and color details needed for a laboratory analysis, the team said.

The research was led by Aydogan Ozcan, Chancellor’s Professor of Electrical and Computer Engineering and Bioengineering, and Yair Rivenson, a UCLA postdoctoral scholar. His research group has introduced several innovations in mobile microscopy and sensing, and maintains a particular focus on developing field-portable medical diagnostics and sensors for resource-poor areas.

Using deep learning, Ozcan said his team set out to bridge the gap in image quality between inexpensive mobile phone-based microscopes and gold-standard bench-top microscopes that use high-end lenses. He believes the approach is broadly applicable to other low-cost microscopy systems that use, for example, inexpensive lenses or cameras, and could facilitate the replacement of high-end bench-top microscopes with cost-effective, mobile alternatives and could find numerous applications in global health, telemedicine and diagnostics-related applications.

Quantum sensors of the future
To serve as a miniature toolkit for measuring important quantities such as length with quantum precision, National Institute of Standards and Technology (NIST) researchers have created a chip on which laser light interacts with a tiny cloud of atoms, and which could be mass-produced with existing technology. 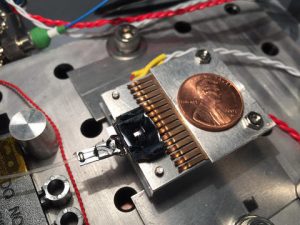 NIST’s prototype chip for measuring important quantities such as length with quantum precision. The device works by using a laser to probe atoms to generate infrared light at a precise wavelength. The NIST chip packs a tiny cloud of atoms and structures for guiding light waves into less than 1 square centimeter. The atoms are contained in a vapor cell—the square window on top of the chip, which is surrounded by black epoxy holding a fiber-optic array. The penny is a scale reference.
Source: NIST

NIST’s prototype chip was used to generate infrared light at a wavelength of 780nm, precisely enough to be used as a length reference for calibrating other instruments, the team pointed out.

The NIST chip packs the atom cloud and structures for guiding light waves into less than 1 square centimeter, about one ten-thousandth of the volume of other compact devices offering similar measurement precision.

Devices based on light interactions with atomic vapors can measure quantities such as time, length and magnetic fields and have applications in navigation, communications, medicine and other fields, the researchers said.

Further, the new chip shows that lasers and atomic vapor cells could potentially be mass- produced together like semiconductors, using silicon materials and traditional chip-manufacturing techniques, instead of the current manual assembly of bulky optics and blown-glass vapor cells, NIST group leader John Kitching said. This advance could apply to many NIST instruments, from atomic clocks to magnetic sensors and gas spectrometers.

Algorithmically-developed artificial antimicrobial peptides
During the past several years, many strains of bacteria have become resistant to existing antibiotics, and very few new drugs have been added to the antibiotic arsenal. To help combat the growing public health problem of antibiotic resistance, scientists are exploring antimicrobial peptides — naturally occurring peptides found in most organisms — most of which are not powerful enough to fight off infections in humans. As such, researchers are trying to come up with new, more potent versions. To this point, MIT and the Catholic University of Brasilia researchers have developed a streamlined approach to developing such drugs.

The strategy relies on a computer algorithm that mimics the natural process of evolution, has already yielded one potential drug candidate that successfully killed bacteria in mice.

It is commonly understood that antimicrobial peptides kill microbes in many different ways: they enter microbial cells by damaging their membranes, and once inside, they can disrupt cellular targets such as DNA, RNA, and proteins.

In the search for more powerful, artificial antimicrobial peptides, scientists typically synthesize hundreds of new variants, which is a laborious and time-consuming process, and then test them against different types of bacteria so Cesar de la Fuente-Nunez, an MIT postdoc and Areces Foundation Fellow and his team wanted to find a way to make computers do most of the design work. To achieve that, they created a computer algorithm that incorporates the same principles as Darwin’s theory of natural selection. The algorithm can start with any peptide sequence, generate thousands of variants, and test them for the desired traits that the researchers have specified.

However, given that a report commissioned by the British government estimated that antibiotic-resistant bacteria will kill 10 million people per year by the year 2050, coming up with new methods to generate antimicrobials is of huge interest, both from a scientific perspective and also from a global health perspective, de la Fuente-Nunez added.