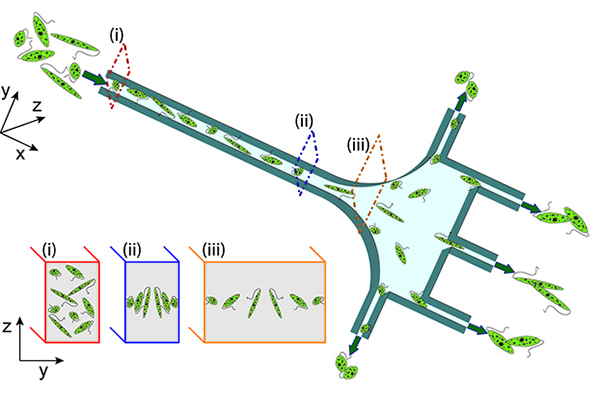 Researchers from UCLA and the University of Tokyo have demonstrated a new capability to sort microalgae cells by their shape, creating a baseline of uniform cells for a large range of research, industrial and clinical applications. While traditional separation methods are based on porous filters or sedimentation in which cells settle due to gravity, this is the first time shape-based separation has been made possible. The research was published today in Nature Scientific Reports.

Microalgae have been attracting considerable attention as renewable “living factories” for generating various products, such as sustainable biofuels, health food, livestock feed, and cosmetics. This is due to the capability of algae to use sunlight to produce complex organic molecules that are well-suited as fuels and other high value chemicals with less processing steps. Algae are also able to grow on non-arable land without competing with agriculture; use nutrients from wastewater; and take in carbon dioxide (CO2), reducing greenhouse gas levels.

Euglena gracilis (E. gracilis), a single-celled eukaryotic microalga, has been proposed as one of the most attractive microalgal species for biodiesel and biomass production. Like many algae, E. gracilis exhibits a number of shapes, ranging from nearly spherical to elongated cylinders. Shape is an important biomarker, serving as an indicator of biological clock status, photosynthetic and respiratory capacity, cell-cycle phase, and environmental conditions.

The ability to obtain cell populations with synchronized shape has significant implications for applications in biological research and industrial processes where cell populations with uniform properties are desired. It is envisioned that this platform, integrating with metabolic and genetic engineering technologies, can be used as a powerful tool to develop enhanced E. gracilis cells as well as other microalgal species with desirable properties, such as rapid growth rate and high lipid content.

The researchers developed a continuous flow “inertial microfluidic” technique to filter E. gracilis by a key shape parameter-cell aspect ratio.  The researchers found that due to the momentum of the fluid flowing around the algae, cells migrated differentially when flowed through a precisely-shaped channel and the distance to the channel centerline decreased with increasing cell aspect ratio, the ratio of the cell’s length to width. E. gracilis cells that migrated differentially based on their shape were finally directed to different outlets based on their unique location in the channel.

The research was supported by the ImPACT program, a R&D program led by the Council of Science, Technology and Innovation (Cabinet office, Government of Japan), and the Japan Science and Technology Agency (JST).  The University of Tokyo also published a news release on the paper.