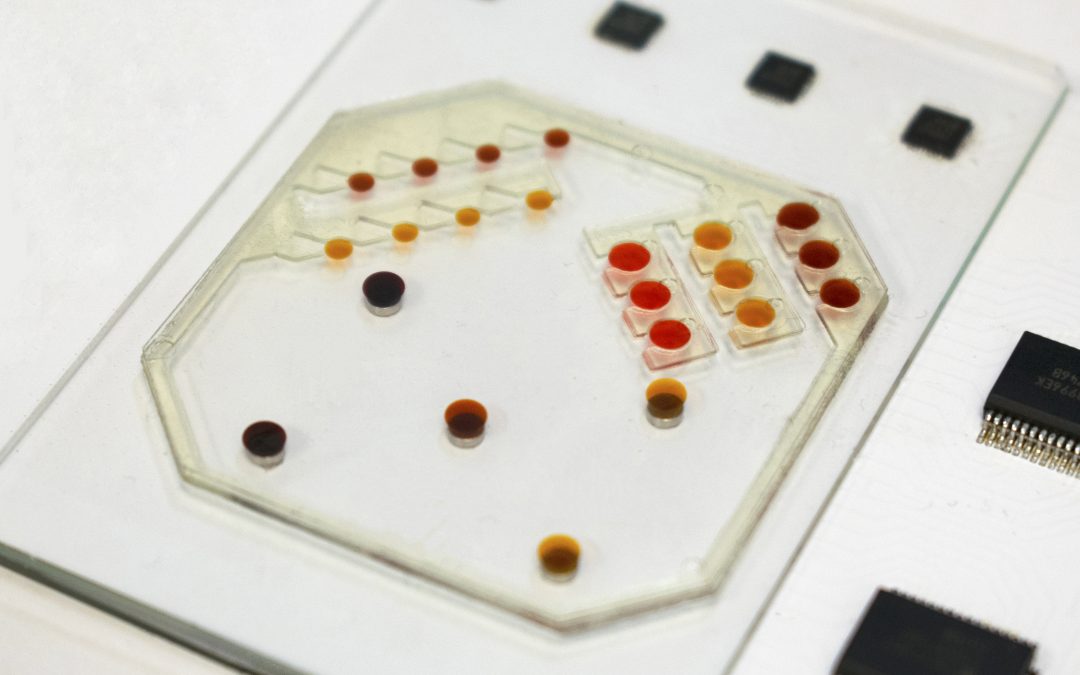 The robots-on-a-chip system could lead to faster, automated blood diagnostics for disease screening

UCLA engineers have developed minuscule warehouse logistics robots that could help expedite and automate medical diagnostic technologies and other applications that move and manipulate tiny drops of fluid. The study was published in Science Robotics.

The robots are disc-shaped magnets about 2 millimeters in diameter, designed to work together to move and manipulate droplets of blood or other fluids, with precision. For example, the robots can cleave one large droplet of fluid into smaller drops that are equal in volume for consistent testing. They can also move droplets into preloaded testing trays to check for signs of disease. The research team calls these robots “ferrobots” because they are powered by magnetism.

The ferrobots can be programmed to perform massively parallelized and sequential fluidic operations at small-length scales in a collaborative manner. To control the robots’ motion, electromagnetic tiles in the chip pull the ferrobots along desired paths, much like using magnets to move metal chess pieces from underneath a chess board.

“We were inspired by the transformational impact of networked mobile robot systems on manufacturing, storage and distribution industries, such as those used to efficiently sort and transport packages at Amazon warehouses,” said Sam Emaminejad, an assistant professor of electrical and computer engineering and the study’s corresponding senior author. “So, we set out to implement the same level of automation and mobility in a microfluidic setting. But our ‘factory floor’ is much smaller, about the size of your palm, and our goods, the fluid droplets, are as small as a few tenths of a millimeter.”

The “factory floor” is an index card-sized chip, designed by the researchers, with internal structures that help manipulate fluid droplets transported by the robots, as demonstrated in this video.

“In the same way that mobile and cross-collaborative Amazon robots transformed the logistics-based industries, our technology could transform various biotech-related industries, including medical diagnostics, drug development, genomics, and the synthesis of chemicals and materials,” said study co-corresponding and senior author Dino Di Carlo, UCLA’s Armond and Elena Hairapetian Professor in Engineering and Medicine. “These fields have traditionally used refrigerator-sized ‘liquid-handling’ robots. Using our much smaller ferrobots, we have the potential to do a lot more experiments – and generate significantly more data – with the same starting materials and in the same amount of time.”

The researchers showed in one of their experiments how an automated network of three robots could work in concert to move and manipulate droplets of human plasma samples on a chip in search of molecular markers that would indicate the presence of cancer.

“We programmed when and where the tiles were switched on and off to guide ferrobots through their designated routes,” said Wenzhuo Yu, a UCLA electrical and computer engineering graduate student and a co-lead author on the paper. “This allows us to have several robots working in the same space, and at a relatively fast pace to accomplish tasks efficiently.”

The robots moved at 10 centimeters per second and performed more than 10,000 cyclic motions during a 24-hour period in the experiements. In addition to transportation, other functions such as dispensing, merging and filtering of fluid samples were demonstrated as ferrobots interacted with structures on the on the chip.

The other co-lead authors of the study are UCLA graduate students Haisong Lin and Yilian Wang, in electrical and computer engineering, and bioengineering, respectively.

Xu He, Nathan Chen, Kevin Sun, Darren Lo, Brian Cheng, Christopher Yeung and Jiawei Tan, members of either Emaminejad’s or Di Carlo’s research groups at UCLA Samueli, also authored the study. The robots and their chips were fabricated at the UCLA Nanoelectronics Research Facility. An application for a patent on the technology has been filed.